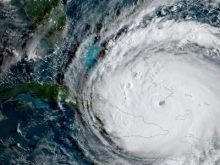 It has not been a calm, quiet couple of weeks—not for the Atlantic, the Caribbean, the Gulf of Mexico or the greater Southeast United States. In a matter of a few weeks several major hurricanes, including now unforgettable Harvey and Irma, have torn through Texas, Florida and the Caribbean islands, leaving lives lost, lives interrupted and normality in suspense.

Natural disasters are dangerous and complex threats to public health, and on a large scale. According to the Centers for Disease Control and Prevention, a disaster “is defined on the basis of its consequences on health and health services. A disaster is a serious disruption of the functioning of society, causing widespread human, material or environmental losses, that exceeds the local capacity to respond, and calls for external assistance. Natural and man-made disasters can occur without warning; preventing them from resulting in major public health emergencies requires careful planning.”

So what measures can people take to prepare for the health threats presented by natural disasters? First, bear in mind that a few major concerns should determine the prep that needs to be done. In the case of a hurricane, Consumer Reports lists three top priorities: staying hydrated (without getting sick), making sure food is not spoiled, and avoiding injury, infection and other illness.

People who choose not to evacuate, or cannot evacuate before a storm, should try and stock up on at least three days’ worth of clean drinking water prior to a storm, be prepared to boil (or decontaminate with chlorine bleach) water that may have become contaminated during flooding, or have a portable water filter at the ready. Stocked food should include as many non-perishable items as possible, perishables should be used first, and hand sanitizer is important for making sure food prep is sanitary. It’s important to remember to have stocked enough fuel for cooking stoves or grills and that cooking with these tools should always be done outside the home. Finally, no home should be without a fully stocked first-aid kit, and following a storm, people and pets should avoid downed power lines, flooded areas, and any other hazard that could result in unforeseen injury, infection, or illness.